Written by admin
No comments   /   Leave a Comment?
Behind The Scene Series Info Spoliers Uncategorized

When we were planning season one and season two we knew that eventually Jackson and Dani were going to make it down the aisle how could they not? From their crazy start as lovers to friends, to officially becoming a BDSM couple, to his first relapse with her, to her getting pregnant with the twins and kidnapped by Kendrick we knew they would wind up at the altar. They are soulmates, have been since the moment we planned the show and they are a fan favorite and in the original run of the show they didn’t have a huge wedding. So we knew going in the build up to the wedding was going to be the event of the season. Much like Bliss and Hunter, their wedding is unique and to them as a couple to show their highs and their lows as a couple and full of wonderful goodies that we hope fans love and appreciate as much as we did planning their look for their day!

Kelly: So when Chris was planning for Jackson and Dani’s wedding I was really torn on what type of a dress she would wear. I thought about a princess gown or even something like Bliss wore in the mermaid style but it didn’t seem to fit. So I knew she would want something elegant and yet at the same time show off a little sexiness when it came to marrying Jackson. Eventually I loved how this gown was done in the white, the sleek lines, the fan beading that in a way reminds me of fireworks and those sexy buttons on the back fit Dani to a tee. Rounding out she is wearing the Davis family sapphire earrings, a pearl headpiece and veil her grandmother Grace wore and a diamond bracelet from her new sister in laws.

Chris: I totally let Kelly choose the dress, we disagreed on one thing. I wanted Dani to have like three dresses and Kelly was determined to keep one dress feeling it wasn’t her. When I stopped and thought about it, Dani isn’t a showoff like some of our other women on canvas. I felt like the dress she picked was perfect. It was that timeless beauty that I feel Dani is and quite ethereal also. Once I saw the tux and dress together I knew this was what they had to look like for their big day. 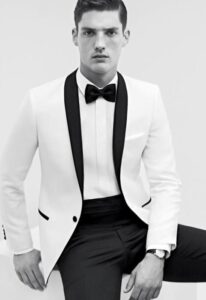 Chris: I wanted him to look like James Bond. Tailored and perfect I always find the epitome of a man sexiness is in a suit. So I choose this white tuxedo jacket with black lapels and black pants. I feel like this accentuated Dani’s dress in so many ways. White generally means pure and his heart is pure with Dani. I think men are way more easier to find tuxedos for most of the time like in real life the bride is the star. However I think Val made sure that Jackson looked just as sharp and classic as Dani. 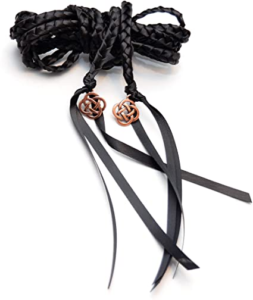 Kelly: I actually had to reread the season to see that Chris put it in there when he planned and I was like that is so perfect for them. Hand-fasting is a huge thing in Scottish/Irish culture as it was seen as a forever statement binding yourself to the other person for life. Which for them as a couple they have been bound together both figuratively and literally for a while now. On the flip side as well it is a huge tongue in cheek moment for them to their guests about their sexual relationship as a way for them to solidify that publicly too. We found the perfect cord that lets face it Jackson’s using that on the honeymoon one way or another on her too!

We knew they would be getting married on New Years Eve so a lot of the lights and colors would still be up for Christmas, red with the poinsettias, gold and black seemed to fit them as a couple perfectly for their big day. Red, represents passion, energy and excitement which fits how they both look at life and each other. Gold represents luxury, elegance and affluence, which is a combination of how they were both raised and their union. Black was a risky choice but for them it made so much sense from the handfasting cord, to the black on Jackson’s tux. Black represents power, control, protection, dignity and submission sexually with your partner. Which for them was something we both thought they would do and have in their wedding is formal “black tie” event.

The Song “The Bones” Maren Morris and Hoizer

Kelly: Chris was like what should be do for the song for a while and then I heard this song the first time and had to play it for him. After one listen we agreed this was their song. Their “bones” so to speak are good they have built their relationship up solidly over the course of the show. The “wolves” and “hard times” came and went in his addiction, her past, their fathers and Kendrick and they were still standing. They both “tried to mess it up” with pushing each other away and not being truthful at the start. They are a couple willing to put in the work together to work on their relationship and not quit at the first sign trouble or something trying to strip that foundation. When you have a deep rooted foundation to a relationship you know you can make it through anything which is where we really see Jackson and Dani as a couple so it totally fit for them.

Chris: I picked most of the songs of the season but this one I let Kelly have and when I heard it I felt it was perfect. The song really was about the bones in their relationships and how that skeleton holds them up. I truly wanted to use John Legend’s “This Time” . We plan on making a wedding playlist but this song fits them the most and what would be played at the wedding. Each future couple will have the same including an exclusive look at the fashion of each character.

© 2015–2020 Blissful · Theme by Sin21 · Back to top · Homepage
All characters, storylines and/or locations are a creation all of our own. All images are simply to represent the “actor” and/or “actress” to represent each role, as a visual for our readers. All images belong to their original owners. © 2012–2020 Blissfulseries.com.